Facebook’s chief has said that 2018 has been an “intense year” for his firm.

But Mark Zuckerberg also took the opportunity to unveil a dating service among other new products at his firm’s annual F8 developers conference in San Jose, California.

He told his audience that the match-making feature would take privacy issues in mind and would launch “soon”.
The company can ill afford another data scandal as it continues to be embroiled in the Cambridge Analytica affair.
“There are 200 million people on Facebook who list themselves as single,” said Mr Zuckerberg.

“And if we are committed to building meaningful relationships, then this is perhaps the most meaningful of all.”
Shares in the dating business Match Group fell after the announcement and closed more than 22% below their opening price.
The firm owns Tinder, a dating app that sources its profile information from Facebook.

Facebook has faced fierce criticism ever since it emerged that it had failed to check whether political consultancy Cambridge Analytica had deleted data harvested about millions of its users.
Mr Zuckerberg said that this was a “major breach of trust” that must never happen again.
As part of efforts to restore confidence, he said the firm was building a new Clear History tool to provide members with more control over how their information is used.
The feature will:

However, in a related blog, Facebook has acknowledged that the tool will take several months to develop, and that it would still need to retain related information in “rare cases” for security reasons.

ALSO READ  Nasim Aghdam, 39 who shot three staff at YouTube’s HQ before killing herself had feud against the site

Mr Zuckerberg also addressed his company’s efforts to tackle fake news and detect operations designed to disrupt elections.
But while he opted not to unveil a smart speaker – which the BBC understands had once been destined to launch at F8 – he did introduce other novelties.

Image copyrightFACEBOOKThe headline feature is a new service to help singletons on the platform meet potential dates.
He said the opt-in feature would focus on “real long-term relationships, not just hook-ups”, and would exclude existing friends from potential matches.
“We have designed this with privacy and safety in mind from the beginning,” he added
Mr Zuckerberg also announced that video chat and new augmented reality filters were coming to its photo-sharing Instagram app.
In addition, he said that group video calling would soon launch on its WhatsApp messaging service.
Big businesses will also benefit from new WhatsApp tools to help them communicate with their customers, he declared.
The chief executive also paid tribute to WhatsApp’s co-founder Jan Koum, who announced he was quitting the company yesterday.
“One of the things I’m most proud of is we’ve built the largest, fully encrypted network in the world,” Mr Zuckerberg said.
According to an earlier report by the Washington Post, Mr Koum had decided to leave because he was unhappy that the forthcoming business tools would involve a weakening of WhatsApp’s encryption.

Mr Zuckerberg rounded off his list of unveils by revealing that his company’s Oculus virtual reality division had begun shipping its first standalone headset, meaning the device does not need to be plugged into a PC or smartphone to work.
He said the $199 kit – which costs £199 in the UK – was the “easiest way to get into VR” and had the “highest quality lenses and optics that we have ever built”.
The firm’s larger Oculus Rift headsets have proved less popular than many industry insiders had predicted, and appear to have been outsold by Sony’s less powerful PlayStation VR gear.
Experts are split about the new device’s prospects.

“The new device makes VR much more accessible to everyone,” commented Adrian Willings from the gadget review site Pocket-lint.
“It’s a brilliant middle ground, but it’s a mobile experience so not as good as a PC one.”
But the head of games at the IHS consultancy was less positive.
“I see the Oculus Go headset as quite awkwardly positioned versus existing technology in the market,” said Piers Harding-Rolls.
“The major thing it has going for it is its price point, but the fact it has a similar user-experience to a premium smartphone adapter headset limits its appeal.”

For Mark Zuckerberg there were two audiences for his speech – the 5,000 developers in the hall, many of them anxious about their businesses, and the two billion Facebook users who don’t know whether they should trust the social network.
For developers, who have seen much of their access to data frozen as the privacy crisis deepens, he announced the reopening of app reviews. That means an end to a logjam for new apps.
There was a mild cheer for this quite limited move and a huge one when he told attendees they would all walk away with a free Oculus Go VR headset – some people are easily pleased.

Image copyrightREUTERSImage captionFacebook developers had complained that some of their apps had stopped working as a consequence of its emergency measuresFor the wider audience, Zuckerberg kept hammering away at what has become his new mantra – that Facebook needs to take a broader view of its responsibilities.
He admitted mistakes – the Cambridge Analytica breach of trust, failing to spot Russian interference in elections – and outlined the various steps being taken to combat fakery, to investigate dodgy apps and to give users more control.
Apart from a new feature allowing users to clear their history – with the warning that it might make the Facebook experience worse – there was little that was new.
But there was a clear defiant message – yes, Facebook was acting to make users safer, but it would continue to launch new services like dating that expanded its reach.
Mark Zuckerberg thinks Facebook’s huge global audience still believes in his vision – no real signs here that he has been chastened by recent events.

In a separate development, some US-based users have reported that a new prompt has appeared beneath posts on their News Feed asking them if the messages contain hate speech.
The service apparently extends to updates written by Mr Zuckerberg himself. 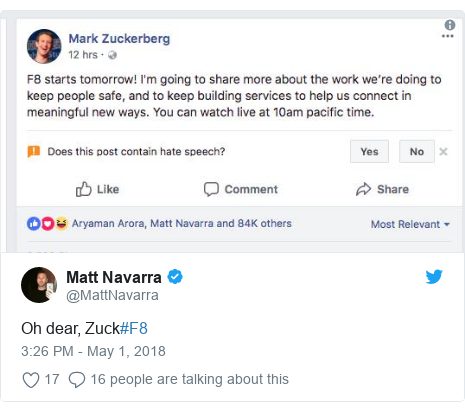 A spokeswoman for Facebook was unable to provide further details

Please navigate to Appearance → Widgets in your WordPress dashboard and add some widgets into the Sidebar widget area.

Open chat
1
Hello !!!
Contact us on Whatsapp
Powered by